I have been thinking more about the MEMBRAIN with its intimate functioning and its risk of disruption (think recent news reports of sexual assaults on campus). Imagine a head of cauliflower, how it develops up from the stem, expands through the addition of increasingly differentiated flowerets, and then ripens as a model of the brain. The growth follows two gradients, first from the inside out and of course, bottom to top.

Looking at the ‘brain’ from the bottom we can see how its growth spreads and expands through differentiated tissues. Our brains start with a neural tube from which all the nerve and glial cells emerge and then travel to their assigned place; the tube ends up being the ventricles wherein cerebral-spinal fluid is made to bathe the cells in nutrients. At the head of the tube the midbrain and cerebrum form with all their lobes and wrinkles.

Imagine further that different vertical structures operate with different neurotransmitters, so that some of the ‘florets’ are one color and some another, some fire up quickly in passing and some slow and sustained, and then further that ‘floret’ tops communicate with each other through long fibers front and back (green bands), left and right (commissures). Get the picture? (Yes, we see).

As stated in the last post, intimacy involves very open MEMBRAIN functions, much is let in and out, not much is kept in or out. This permeability is managed through the arousal (and then the attentional) system that initiates from a central structure and goes up into the cerebrum. That is the red circle at top. Indeed, when you watch an fMRI you can see the intensity of arousal rising up through the middle and then spreading out as the lateral systems begin to process front and back, left and right. 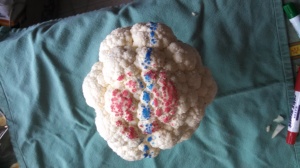 We start our intimate journey at the outset with our parents when our brains are beginning to ripen, i.e., mature. When we attach and bond with them we are using and developing lower and central structures and because the right side matures earlier than the left, we are also using our right hemisphere more. The mother-child communication is done with the right side of the brain.

These experiences are important for oh so many reasons, particularly because this helps us develop our control of emotional arousal and thus MEMBRAIN permeability. Wow! And later, as the left hemisphere comes into its own, the child learns to attend to fine motor tasks while ensconced in a safe, nurturant and guiding relationship. 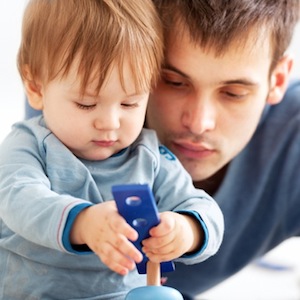 Now some early events can bruise the ripening fruit and affect its subsequent development, subtly affecting its capacity for intimacy. Should the mother become unavailable through emotional difficulties, illness, substance abuse, physical absence (think military deployment), or death, this loss can affect how the brain ripens. Likewise, trauma, especially family violence and sexual abuse, bruises the brain and this bruise can be seen in the deficient development of emotional control and the subsequent compromise of intimacy. And this is important because we start by developing our intimacy capacity as we travel on to develop our intellectual abilities.

Consider two features of children with attachment disorders and/or an early history of family based trauma. The first is that they want constantly and this want is rarely satisfied. The parent (figure) can give and give but the child does not take it in really; their MEMBRAIN is impervious to affection and its manifestations. You give them a hug and they want more or something else or you hugged another child so . . . or you give them shrimp and they want steak or . . .you get the idea. This emotional coldness extends to their own lack of empathic consideration for others. The second is that they do not operate with sequential reasoning very well and this includes responsibility for their own actions. Parents can watch the child’s misbehavior directly and then grow exasperated when the child denies its actions. When working with them therapists (and parents) have to back up a step and teach them to think in story board form like a comic strip, e.g., this follows from this and that follows from that. Their intellectual grasp of these matters was compromised when the MEMBRAIN was bruised early on.

The violation of intimacy by males sexually assaulting females is related to this and I will say more later about that, but I am also getting an itch to talk about other topics. So long for now.