I like Neanderthal stories for two reasons. First, this research shows science at it best in the development of technologies to date artifacts, the diligent search for ancient clues, and especially, the fact that our conception of who the Neanderthal were has dramatically changed as new data have come in. Since their discovery over a hundred years ago we have gone from thinking them brutes barely different from gorillas to now almost completely human like us. Changing minds through new data is to be much appreciated. The second reason is that genetic studies prove that my ancestors mated with them and I do not want to think of my people long ago mating with brutes of little intellects and no symbolic capabilities. I would hope they were more discriminating.

So the most recent update comes from this story in the NYT: https://www.nytimes.com/2018/02/22/science/neanderthals-cave-paintings-europe.html.

Evidently some paleoanthropologists were holding up their admission of the Neanders into full humanity because they said the evidence allowed the possibility that their use of tools and their art making were copied from Homo sapiens. That objection has now fallen as art and tools have been found and dated through new, refined technology to time periods way before modern humans entered Europe. Hmm, maybe Homo sapiens copied tools and art from them?

My latest thinking on the inception of symbolic thought, both discursive (language) and presentational (art) forms, is that our heightened empathic abilities led to a rather robust intimacy, a mind to mind connection through kinesic modalities wherein we sensed and knew the other’s subjective mental domain, coupled with the increasing power and specificity of mirroring systems serving communication (think arcuate fasciculus). This yields the view that an intimate connection of immediate sensing of another’s mind coupled with the invariant structure of surface behaviors produced the first symbols.

In this light consider why early art is so often found in caves, and not just close to the entrances but sometimes way back in there. We visited one site in France where an electric railcar took us maybe a mile back into the cave to see etchings of mammoths and other animals on the ceiling. Why? Some say that art rose in association with animist magic, that these paintings were a mystical participation with the animal spirits and communion with Gaia. Read Kim Stanley Robinson’s excellent novel Shaman to see the truth of this possibility. But magic has both public and private aspects. Yes, shaman protected their mysteries (and for good reason because sometimes they were not so mysterious once initiated) but they also performed public rituals. Indeed, magic would not be very useful if not public.

Here’s another thought: Art came about when the need arose to extend intimacy beyond the circle of familiars, art being a personal expression of some vital experience, and so the first artists were a bit shy about their productions and protected their privacy by painting deep in caves. As we learned more about art and more came to appreciate the beauty therein, we moved it out into the public domain and cultural identity took on another feature. Even today while some artists open their studios to audiences, many keep their creations private until complete, and some, like Leonardo da Vinci, keep their most precious pieces in their possession. Leonardo kept the Mona Lisa with him for 20 years, working on it a little bit now and again, and died with it in his room, never giving it to his patron. Personal, private, it was.

Anyway, I really like my hypothesis about the inception of art here; it feels fit to me, this combining empathic intimacy and mirrored communication. (You heard it here first). Time, now, to travel on. 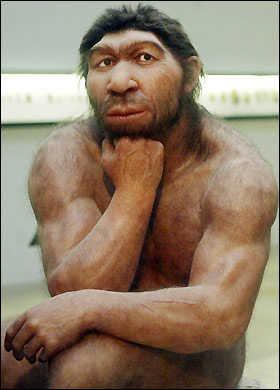 That sapiens guy copied my bison drawing. Good grief! Did a good job though. These new kids may have some talent.